Day 1: After your breakfast our guide will meet you in the lobby at your accommodation (Hotel or Guest House) and will take you to visit Angkor Wat, The biggest monument Hindu temple was built in 12nd Century. After continue to see Ta Promh temple which located on small circle loop, the one with a lot of gigantic root of trees over the temple and It's the place where Hollywood film company made a Movie "Tom Raider".

After lunch around 1:30pm or 2:00pm we’ll visit Ta Nei which is a small & quite temple with less restoration yet, surrounded by big trees. Then we move to the city of Angkor Thom. At first we will start visit Bayon temple it’s the highlight temple in the center of Angkor Thom city with 49 towers which every tower has 4 faces so that’s mean all towers have 196 faces of Budhhistsatva Avalokestesvara and we walk to the next temple nearby called Baphoun which is Hindu temple built before Angkor Wat in 11st Century but the big Reclining Buddha behind built in 16th Century & continue to Royal Enclosure Wall nearby with visit  Elephant & Liper King Terrace as still in complex of Angkor Thom. Afterward the last one of the day Phnom Bakheng climb the hill and temple for enjoy watching sunset view. After sunset when getting dark then we climb down the hill and return to your hotel or guesthouse by 6:00pm or 6:30pm.

Note: Due to the limited number of tourists at the peak on Phnom Bakheng then we will require or take you to climb up Phnom Bakheng a bit earlier and you can take a bit more longer waiting for sunset ( Note : Waiting & see sunset will take 1.45 hours - 2 hours ).

Day 2: Start tour early at 5:00am to watch sunrise at Angkor Wat after view of sunrise come back to hotel for breakfast for you have breakfast and then we start again to Kbal Spean mountain located the north site of Angkor Park and we take along drive almost one hour. At Kbal Spean we must to walk trekking roughly one hour to see sculptures of the gods and Lingas carved under the riverbed, the symbol of the God Shiva’s supreme essence. After we go to see Banteay Srei or called Ladies temple, the one which built from the pink sandstone in half of 10th  century by Hindu King Rajendravarman II for dedicated to trinity Gods in Hindu mainly Shiva.

After lunch around 1:30pm or 2:00pm we’ll visit Banteay Samre, the Hindu temple built in 12 century as this temple the architectures didn't found much evident to tell the fact but they believe similar model to Angkor Wat. After go to Pre Rup temple, a temple with 5 levels that you’ might be enjoy with very nice view when you get up to the top of this temple. The last temple we will stop by visit as on the way Banteay Kdei which is Buddhist temple constructed in 12 century.

Day 3: After your breakfast our guide will meet you in the lobby at your accommodation (Hotel or Guest House) and will take you to visit temples on the Big Circle Prah Khan which built by King Jayavarman VII dedicated to his father. It is a huge, highly exportable monastic complex, and served as a Buddhist monastery and school, engaging over 1000 monks. Continue to Neak Poan, a small island temple located in the middle of the last Barray, constructed by a Khmer King in the Angkor Area and we continue to nearby temple Ta Som, the small temple but classic, East Mebon, a large temple-mountain like ruin, rising three levels and crowned by five towers temple.

After lunch around 1:30pm or 2:00pm we’ll visit temples in Rolous Group ( Lolei, Prah Ko, Bakong ) is a Cambodian modern small town and an archeological site about 13 km east of Siem Reap along NH6. Once it was the seat of Hariharalaya, first capital of Khmer Empire north of Tonlé Sap. Among the "Roluos Group" of temples there are some of the earliest permanent structures built by Khmer. On the way back to city we stop by to visit  Local Market Phsa Leur, Old Market and Artisan d’Angkor, where it is famous for its traditional craft skills products are available such stone carving, wood carving, lacquering, gilding and silk processing. But if you don’t want to see Old Market or Artisan D’Angkor then we go back to your hotel and finish tour.

Day 4 : After your breakfast our guide will meet you in the lobby at your accommodation (Hotel or Guest House) and we will take long driving between 2.5 - 3 hours to see temples in Koh Ker Group, is a 10th-century temple complex in the north Cambodian jungle. A former capital of the Khmer Empire, the site is now remote and heavily forested. The main structure, Koh Ker Temple, is a stepped 7-tiered pyramid. The large rectangular tank, Rahal Baray, supplied water to the complex. The Prasat Krahom, meaning "red temple," is known for its sandstone carvings, while Prasat Pram is covered in strangler figs.

After lunch already around 1:30pm or 2:00pm in the afternoon we will drive down back to see Beng Mealea, as so far this temple still original as no restoration yet and too much covered by jungle that’s why most people called “Indianajon temple”. After Beng Mealea on the way back to city/your hotel if time permit then we will stop to visit Roulos Group ( Lolei, Preah Ko, Bakong )

***Everyday time to start tour you can choose by yourself but we suggest you to start at 8:00am 8:15am or 8:30am 8:45am or 9:00am except sunrise tour which require starting at 4:45am-5:00am. When tour start tour guide and driver will come to pick you up from hotel lobby then you have to be ready already in the lobby at this time also. 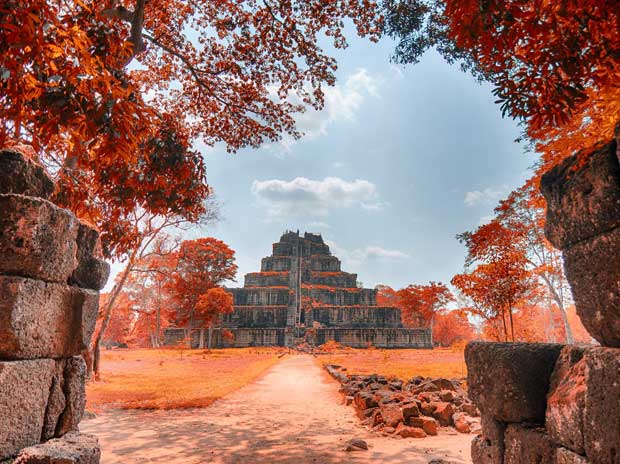